Born February 24, 1990, in Houston, Texas, the American Disc Jockey started his career in 2009 while in college at WestVirginia State University. Being from Houston, the nightlife in the small town of Charleston, WV was tremendously different from his previous exposure, which in turn made him want to bring something different to the nightlife scene. He started his own entertainment company called New Era Entertainment and started doing a variety of different events, with the first being an official Lloyd, American R&B recording artist, Concert and After Party. He started off working campus parties and in a short period of time he became one of the top DJ’s in the entire state of West Virginia.

His passion for becoming a Disc Jockey roots from his love for music and entertaining a crowd. Being a college student, he was able to diversify his music selection by discovering from his peers different types of music from different places. These places include California, Ohio, Florida, Texas, Maryland, New York, and Washington D.C. Having a diverse music selection gained him many supporters and a lot of recognition outside of the state of West Virginia. In 2010, he began to branch outside of the state of West Virginia and began to travel. The 30 year-old, has now done events in Texas, South Carolina, Ohio, Florida, Kentucky, West Virginia, Maryland, Washington, D.C. and New York. 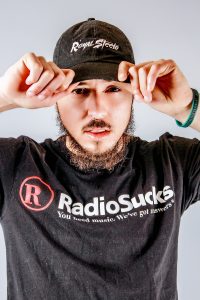 After graduating from West Virginia State University in the spring of 2013, he took his talents into a new market. Following an internship offer from the University of Maryland, he relocated to Waldorf, Maryland to work and get his masters degree in Sports Management from West Virginia University. This opportunity opened a new market for the young disk jockey to become a part of. Just in the matter of months, he has become in the conversation of being one of the top club Disk Jockey in the D.C., Maryland, and Virginia area. As a Disk Jockey, he plays all the hottest music with genres including Hip-Hop, Rap, EDM, Pop, R&B, Reggae, House, and Go-Go. His wide selection of music has enabled him to do a variety of events such as club events, birthday parties, pool parties, cookouts, graduation parties, step-shows, renewal of vows parties, skate parties, concerts as well as the after parties, and basketball summer leagues just to name a few.

Currently, he is working for his own Entertainment Company by the name of Loud Neighbors in which he tries to bring the ultimate party experience to any event. He has dropped 70 mixtapes, with the most recent being Atlanta In The DMV alongside DJ Funky (Founder of Coalition Djs). He is a member of No B.S DJ crew as well as a constituent of the Coalition DJs. He DJ’s for a signed artist by the name of 3ohblack as well as being multiple other independent artists DJ including Kolten Perine, Projex, Johnny Rocket, Gregory Tre and Amala. He has been celebrated in the music community for his dedication by the illustrious CoalitionDJs brand. His DJ style consists of a lot of wordplay during transitions, wide range of song selection, utilization of the looping technique that brings energy to crowds, with a few scratching techniques applied. His stamp of approval seems to proceed many of the DMV’s most successful productions, and that legitimizes his role as a local music mogul. He is a DJ that fully believes in trying to give the crowd what they want. Follow him on social media via Instagram at @DJBlustar and @TheOutstandingDJBlustar.

Last night we went crazy at @arif_lounge we right

I walked so they can run, Bit**, give me my credit