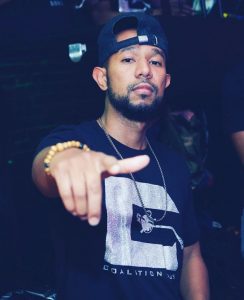 DJ Pinoblack developed a love for music at a very young age. He grew up with family members who rap, dance, dj, and produce music. Music has always been influential to him and an inevitable pursued path. He started off as a rapper and producer in music, and later developed a passion to DJ and continued his musical journey. Pinoblack is from the DC, MD, Virginia (DMV) area, and DJ’s at clubs, lounges and bars in the DMV area every week. He has been DJing for over 16 years. Pino spins a wide variety of music such as Old School & New School Hip Hop and R&B; Reggae; Dance Hall; Afro Beats; Top 40; and Trap to name a few. Pinoblack is a current member of Coalition DJs DMV and continues to make his mark in the music industry.

Back at it tonight at @famouslounge.usa! 🚀🔥

Took the whole weekend off so we could vibe! @dj_l

Pull up tonight to celebrate our @coalitiondjsdmv